Following the Genesis Invitational and final leg of the California Swing, the PGA pros head to Florida for the Honda Classic. The field won’t be nearly as strong as the Genesis, which drew all players in the top-10 of the world rankings.

But while the strength of the Honda field has fallen off in recent years, the 2022 edition did draw six top-25 players and 12 ranked in the top-50 of the world golf rankings – more than double last year’s event.

New Players get up to $1,000 bonus at FanDuel Sportsbook
1

Top players to watch and odds to win the Honda Classic

Starting the beginning of tournament week, betting odds will be posted by the leading online sportsbooks including FanDuel CT and SugarHouse CT.

Daniel Berger was the Honda Classic’s favorite to start last year’s event before he withdrew due to a rib injury. But Berger is back this year and will be one of the leading favorites to win.

Along with 2019 Honda champion Sungjae Im and four-time major champion Brooks Koepka, who was runner-up in 2019.

Also, Joaquin Niemann‘s odds will reflect favoritism being the dominant 36-hole leader at the 2022 Genesis Invitational on his way to winning the tournament and his second PGA Tour title. Niemann has moved up sharply in the world rankings and is now No. 20.

Along with their odds to win the event courtesy of FanDuel Sportsbook.

And participating in this year’s event are:

The Champions Course was designed by George and Tom Fazio in 1981 and was most recently renovated by Jack Nicklaus in 2018. The Golden Bear’s tracks are stamped on the course with the ‘Bear Trap trio of holes from 15-17 lined and surrounded by water near the greens. 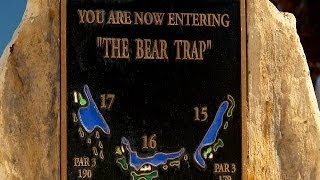 The two Par 3s at the Bear Trap on holes 15 and 17 rank the next most difficult in scoring average.

Accuracy from the tee is rewarded at PGA National and the more undulated and firm greens keep scores from going too low. So does the wind if it blows as it did during the 2020 event when Sungjae Im rallied to win with a 6-under par final score of 274.

Next week the PGA Tour heads to Bay Hill Club & Lodge in Orlando for the Arnold Palmer Invitational starting on March 3.

View all posts by Fairway Jay